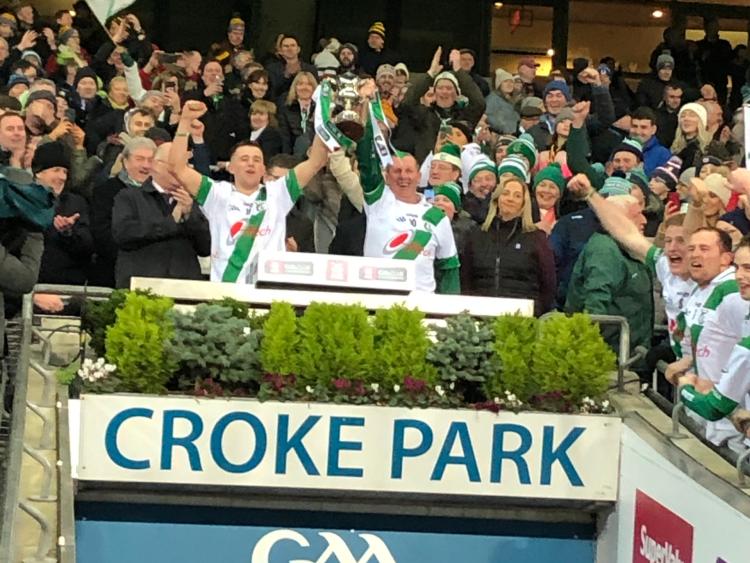 Famous Tullaroan, the biggest winners ever in their home championship, will return to the Kilkenny senior hurling championship this season as All-Ireland champions.

Not even the best of Hollywood could match the wonders produced by this pair who simply let rip. In the end a point from top scorer and Tullaroan captain, Shane Walsh with the second last puck of the match earned Tullaroan a sensational victory.

Things looked good for the Leesiders when they hit the opposition with goals by Deccie Dalton and Cillian Broderick in the 42nd minute - yes, within a minute - to open out a lead of 4-8 to 2-9.

Within 10 minutes Tullaroan had turned the match on its head. They shot 1-7 without the reply, the goal from Martin Keoghan, to jump 3-16 to 4-8 in front. We thought we had seen the best of it.

Not by any stretch of the imagination. Fr O’Neill’s roared back, a 57th minute goal by sub Jason Hankard pulling them back into the game before late back-to-back points from Thomas Millerick and Paudie McMahon levelled it.

Tullaroan produced one last moment of brilliance. Adam Tallis and Martin Keoghan worked the ball to Shane Walsh to shoot the winner at the Canal End with the clock beyond the 63rd minute.

It was a crazy but hugely entertaining contest.

Tullaroan looked nervous and unsure early on. They were all fingers and thumbs and they couldn’t get simple things like raising the ball off the ground right.

Fr O’Neill’s, strong in the tackle and fast and direct in their hurling, made them pay. The Leesiders opened with unanswered points from Eoin Conway, Deccie Dalton from a poorly conceded 65 and Kevin O’Sullivan.

It took Tullaroan 10 minutes to get off the scoring mark. They did so through John Walton after Martin Walsh won a great ball.

Still, as the game hit the 16th minute Fr O’Neill’s were moving well and showed 1-3 to 0-1 in front, the goal coming from Dalton after a great move involving Eoin Conway and Paudie McMahon.

The gap went to 1-4 to 0-1 before the Cats had their second score from Shane Walsh in the 19th minute, but the chase was on. When Martin Keoghan goaled in the 26th minute the winners were ahead, 1-5 to 1-4.

It was level at 1-5 each with the break only a minute away, but after Peter Walsh took a pass from the deadly Shane Walsh to rattle the net, he rifled Tullaroan into an interval lead of 2-5 to 1-6.

The second quarter action looked promising. What followed fell into the realm of the unbelievable, but the sizzling action was lapped up by the 5,498 attendance who were entertained royally even deep into additional time.

Tullaroan may have had to wait and suffer before they won the Kilkenny title, but today they showed they like that winning feeling. They like it a lot!

It was a great day for Kilkenny club hurling in Croke Park. Conahy Shamrocks won the junior club All-Ireland title.