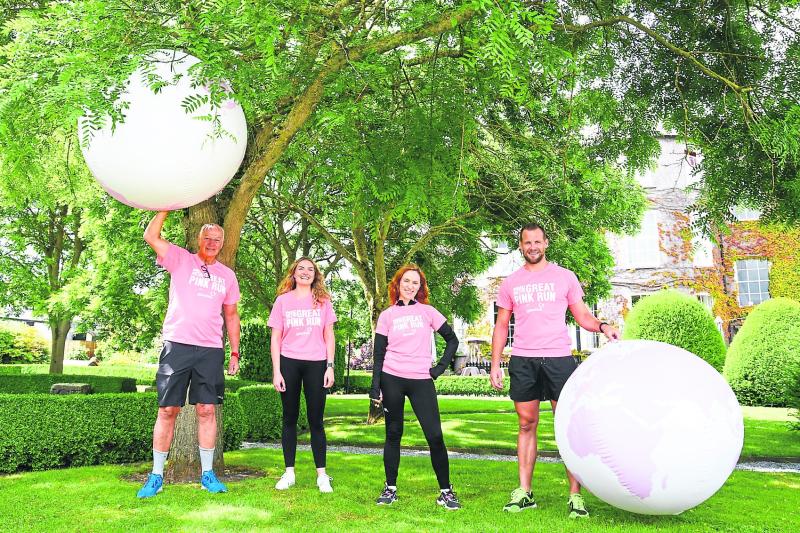 Famous faces at the launch of the 2021 Great Pink Run | Picture: Vicky Comerford

Runners from all over Kilkenny will be aiming to get some colour in their cheeks and help turn the world pink this October.

Following the success of the 2020 virtual event, this year’s offering of the Great Pink Run was launched to great fanfare.

Some of Kilkenny’s best known personalities, including Bobby Kerr and Jackie Tyrrell, were on hand to show their support for the Run, which raises money for breast cancer research.

Forming part of the ‘pink tribe’ the running heroes will be hoping to make this year’s event, which is also virtual, as big a hit as the 2020 run. Last year’s virtual event raised almost €1 million in essential funding for vital breast cancer research.

Held in association with Glanbia and supported by UPMC Aut Even Hospital, the event will be held in local communities, over the weekend of October 16 and 17. As it’s a virtual event, people are encouraged to turn the globe pink, with participants invited to run, walk or jog the circumference of the globe (40,700km) over the course of the event weekend.

Over the next six weeks, several well-known faces will be joining Bobby and Jackie and encouraging people to register.

Among the group will be Virgin Media broadcaster and Breast Cancer Ireland Ambassador Elaine Crowley, social influencer James Patrice, international rugby player Josh van der Flier and TV presenter Nadine Reid. they will join the many thousands who have been impacted by the disease in this country as they pound the pavements and parks of Ireland and abroad in support of the cause.

Participation in the Great Pink Run event is easy – people can register to take part and encourage your friends and family to do the same. After that people can track their run, walk or cycle during the weekend of the event on your smartphone or phone app and upload your kilometres, helping organisers to turn the globe pink.

People can also share their photos, and videos across social media using the #greatpinkrun or #GPR2021 hashtags.

With registrations for the event now open, Aisling Hurley, CEO of Breast Cancer Ireland, is urging people to register early to ensure that participation packs and the much sought-after pink t-shirts arrive in plenty of time for the event.

“In this, the 10th anniversary of the establishment of Breast Cancer Ireland as a charity, we’re excited to see the Great Pink Run go from strength to strength, growing into a truly global event,” she said.

More than 60,000 people have taken part in the Great Pink Run since it began in 2011. In that time runners have raised over €3.5 million to support pioneering research across Ireland, which is ultimately aimed at developing new and more effective targeted therapies for patients diagnosed with breast cancer.