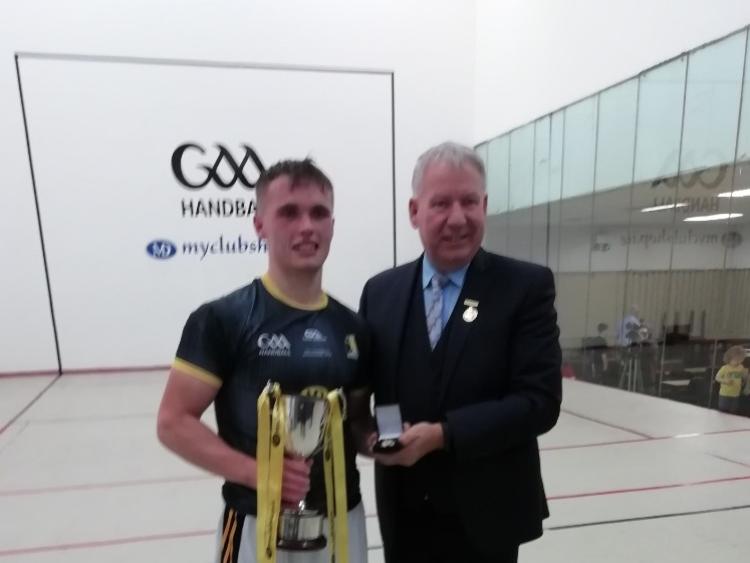 The last programme of handball matches at the Croke Park centre proved to be a very happy occasion for players from the Clogh club.
Contesting two of the three All-Ireland softball finals, the club came home with victories in the minor doubles and intermediate events.
It was a particular happy day for the Dunne brothers, Shane and Kyle. They both won their second All-Ireland title in this year’s championship.
First on the programme was the minor doubles decider between Kilkenny and Monaghan. Here Kyle Dunne and Billy O’Neill faced off against the champions of Ulster, Eoghan McGinnity and Tiernan O’Rourke.
From the start the Kilkenny pair controlled the match and were convincing winners 21-15, 21-10, thus adding another title at this level to the roll of honour.
Having won the singles title against McGinnity, Kyle Dunne collected his second winners medal this season. Billy O’Neill won his second successive title in this grade having won in 2018 with clubmate Ciaran Cooney.
The second match involved Shane Dunne. He contested the intermediate singles final against Ryan Mullen, Tyrone.
A potential tricky match for the North Kilkenny player turned out to be comfortable. He won in two sets 21-12, 21-7 to complete a great season for the up and coming Clogh player.
Like his brother who won both titles in the minor grade, Shane has won the two All-Ireland softball crowns available in the intermediate division.
Also, it completes a great two seasons for the Clogh club, who won the intermediate singles and minor doubles titles in successive seasons along with minor singles, a truly remarkable feat.
On Sunday the ladies junior B doubles involving Windgap’s Margaret Purcell and Caoimhe O’Shea was played in Clonmel. Limerick’s Aishling Shanahan and Ciara McCarthy provided the opposition.
Although winning the first set 21-20, the Kilkenny pair were unable to prevent the Munster champions from winning the next two games 21-1, 21-13 to take home the honours.
Juveniles
On Sunday the juvenile softball season comes to a conclusion when Connacht host the All-Ireland finals.
With matches scheduled for Moycullen, Galway and St Coman’s, Roscommon the Kilkenny support will be split between venues.
At the newly built Moycullen complex, the girls under-15 doubles, undere-16 singles and the boys under-16 singles will be played.
First up in the under-15 decider are Lauren Power (Clogh) and Nathania Jackson (Windgap). They face Clare. Amy Brennan (Clogh) and Billy Drennan (Galmoy) will take on Galway opponents in the under-16 singles finals.
At the Roscommon town venue, Emily Kenny (Tabot’s Inch) and Lauren Grace (Kells) play Cork in the girls under-17 doubles, and in boys under-15 singles Conor Holden (Kilfane) will aim to see off the challenge of Sligo in the final.
In one All-Ireland final played at Talbot’s Inch on Friday night Emer Barron (Windgap) and Aishling Cooney (Clogh) lost to Tipperary in the girls under-14 doubles grade.
The Kilkenny girls started quickly and won the first set 15-3. However, from there on Tipperary took over and won the games 15-5, 15-4.
Fixtures
All-Ireland finals on Sunday in Moycullen, Galway girls under-15 D, Clare (Eimear Murphy/Leah Minogue) v Kilkenny (Lauren Power/Nathania Jackson); girls under-16 S, Kilkenny (Amy Brennan) v Galway (Sadhbh Ni Fhlaithearta); boys under-16 S, Kilkenny (Billy Drennan) v Galway (Mikey Kelly).
St Coman’s, Roscommon (11am) girls under-17D, Cork (Celine Kelleher/Muireann O’Brien) v Kilkenny (Emily Kenny/Lauren Grace); boys under-15S, Kilkenny (Conor Holden) v Sligo (Cormac Finn).