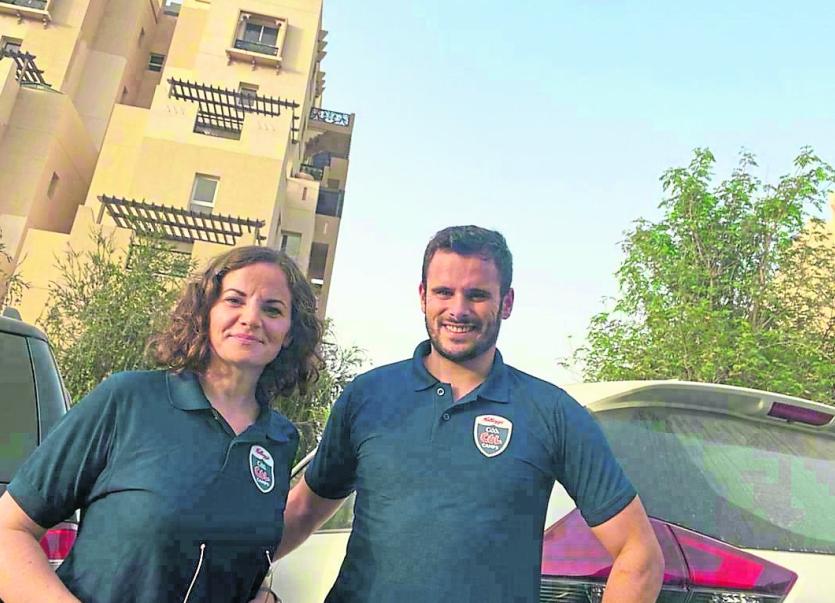 Some of us may not be around to see it, but for those that might, do not be surprised if you are sitting in a private box in Croke Park watching Dubai or Abu Dhabi in an All-Ireland hurling final - and don’t forget to remind people of who was daft enough to suggest the idea in the first place, and which paper carried the prophetic suggestion!

I bumped into a great friend of mine in Community Radio Kilkenny City recently, Pat Treacy, who showed me some amazing photographs of youngsters togged out in the much sought-after Kellogg’s Cúl Camp regalia, carrying hurleys, and some striking sliotars.

I was intrigued that many of the young boys and girls had a golden brown complexion. They were all in an enormous indoor astro turf arena which, I found out later, was air-filtered to keep players cool from the scorching sun outside.

I speak from the experience of being an emigrant many moons ago. I remember how the GAA was such an integral part of the emigrant ethos, and how it’s collective embraced the thousands and thousands of young Irish boys and girls, rendered assistance through its numerous Irish centres around the UK.

I speak of a time when emigrants visited home maybe once a year. Some left it longer, while other misfortunates never made it home at all. In those times the Irish Centres and particularly GAA Clubs were a tremendous source of support.

Not only in London, Birmingham and Coventry did the GAA prosper, but in Yorkshire, Gloucester, Lancashire and beyond; the GAA baton was being carried by an ever-increasing explosion of Irish emigrants.

The Dubai Celts Juvenile Club is a hugely prominent Irish fixture in the Emirates. Every Saturday morning, the club caters for over 80 youngsters. The black and amber dominates, although there are other people involved with the coaching of the youngsters.

Cork man Luke O’Brien from the same club as Cork star, Seamus Harnedy, is the driving chairman of the club. His head coach is a young Kilkennywoman well known to camogie people around the county.

Aoife Treacy, daughter of Pat and Mags Treacy (Danesfort), captained St Brigid’s College Callan to an All Ireland success in 2001. She also played with the Kilkenny junior team that were successful in Croke Park in 2002.

For many decades the Irish Diaspora cut a reputation of being clannish and reneging on their identity or their heritage. In this regard, the establishment of associations like the GAA helped in no small way to maintain a connectivity between so many thousands of our emigrant population.

And so, it came to pass that the girl from Danesfort and the lad from the Rebel County thought it a good idea that a Cúl Camp in far away Dubai could morph into a good idea.

After a two-hour Zoom call to National Hurling Development - Castlecomer’s Martin Fogarty - coupled with an hour of back-breaking planning, the Dubai Cúl Camp emerged from a pipe-dream to a superbly orchestrated event in the Kickers Indoor Dome over two weekends in June.

A resounding success for the hard-working committee, the Irish Diaspora were exceptionally proud to see our national games of hurling, football and handball being presented on a foreign stage over 3,200 nautical miles from the Emerald Isle.

Parents loved the idea. Nostalgia was the order of the day. The Cúl Camps helped to recreate memories of great excitement, and youthful enjoyment. The attendance of Irish Deputy Ambassador to the Emirates, Anita Kelly, was a huge endorsement of the outstanding achievement by the committee.

The Treacy Family were very central to the success of the venture. Aoife, who teaches Art in the Gems School at the iconic Wellington Academy in Dubai, was very much in the vanguard of the achievement from the get go moment.

Aoife, who is a mother of two children, Conor and Fiadh had tremendous encouragement in her aspirations from her brother, Cillian, former Kieran’s College and Danesfort under-21 winning captain in 2015.

He was also a regular member of the Danesfort senior team before seeking his fortune in foreign lands. He is also a muinteoir in the Winchester Academy, teaching maths.

There was even more Kilkenny involvement. Castlecomer native Aoibhlinn Hester - her father, Michael, was principal of the Comer Community School - runs her own Production Company in Dubai.

Well I remember the lovely ’Comer girl with the delightful personality as she produced her own show in the old Radio Kilkenny on the Hebron Business Park where the Community Radio is now situated.

Aoibhlinn Wyne is now married with twin daughters, Edith and Bernadette, and is still closely involved with the Irish community in Dubai.

He organised a video message from Limerick’s All-Ireland stars Cian Lynch, Aaron Gillane and Diarmuid Burns, which was transmitted during the activities.

Cork’s Seamus Harnedy also weighed in with encouraging messages for all involved. Another resident who was very central to the success of the project was Aidan Connolly, a nephew of the wonderful Galway captain of 1980, Joe.

It took plenty of misneach to do what the people above achieved last June. But isn’t that what we Irish are good at?

Easy enough to do it at home where support is in abundance.

But to do what the Treacys, Aoibhlinn Wyne nee Hester from Kilkenny, Luke O’Brien, James O’Connell, coaches Wes Morrissey - another son of Limerick- Aidan Connolly – son of Galway All Ireland captain in 1980 Joe - and Cillian Treacy is not surprising.

It’s in the DNA! It’s the field where the Irish emigrant is a world leader.

Nobody does the Diaspora thing better.